An International First: A Camera Inside an Hérens Cattle Fight
Planning & booking

An International First: A Camera Inside an Hérens Cattle Fight

This is the first time a camera has been installed on the back of a fighting cow. Experience the event in the very heart of battle, during the inalpes in Val d’Hérens. 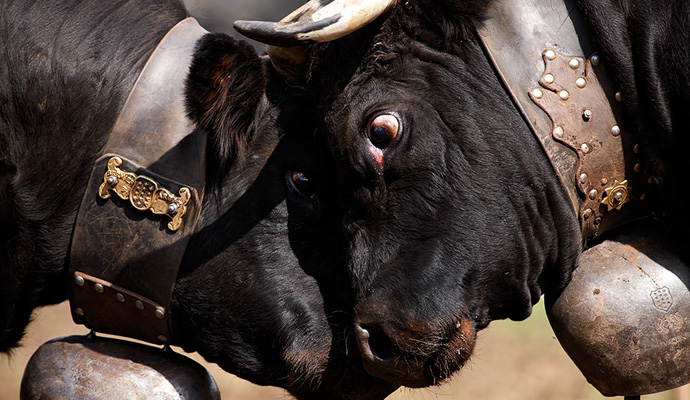 In Switzerland, in the canton of Valais, cows of the Hérens breed, with their fiery tempers, are natural born fighters.  They pit themselves against each other to determine hierarchies within the herd, a practice that exists nowhere else outside of this breed.  And these combats are no less natural: the domination instinct pushes cows to fight, horn to horn, to determine the herd queen during their rise to the mountain pasture.

In the Heart of Battle

For the first time, a sports camera has been placed on a cow’s back, allowing viewers to feel the shock and force of the combat that is known as “queen fighting.”  On the search for unusual images that could show the instinctive and natural side of this unique race even better, the film crew managed, with the owner’s consent, to fix the camera on the cow’s withers (on the back, above the front legs).

Making of the Video

It is the Breew Agency that has followed several cows in the pasture to film them during combat with the help of various filming systems (cameras, digital devices and drones).  The film crew had the job of setting up the concept with a camera on the back of “Tonnerre,” a Val D’Hérens native that was very much into the spirit of this game of trying on clothes.  With a GoPro HD filming system as well as the brand’s official accessory, the “Chesty” Chest Harness, the brand’s compatibility with both humans and combat cows was thus proven!